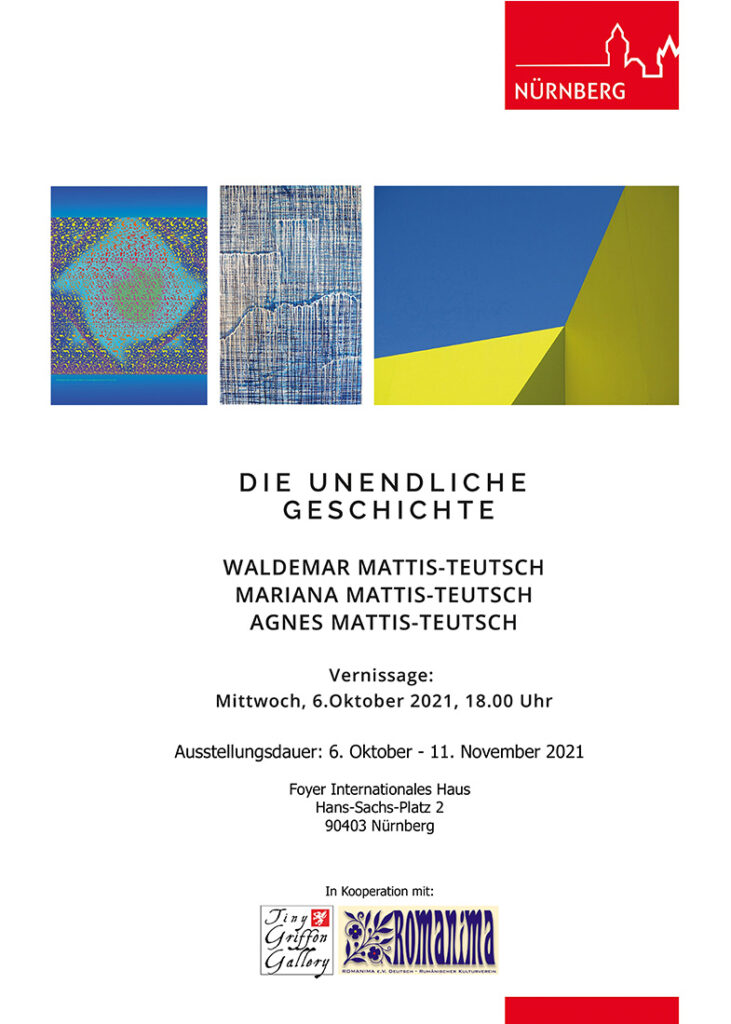 The exhibition "Neverending Story", signed by Waldemar, Mariana and Agnes Mattis-Teutsch, is much more than a continuation of a tradition that lasts for four generations, an artistic tradition initiated by Hans Mattis Teutsch, expressionist artist who became famous in interwar Europe. This meeting between three artists of the same family is not only a union of names, but a communion of three artistic visions expressed differently but in sinergy. It is also a celebration of Waldemar Mattis-Teutsch's return to Nuremberg, six years after his first exhibition, in tandem with sculptor Joseph Stefan Wurmer at the Tiny Griffon Gallery in 2016, the first art event in a long series of exhibitions supported by the International Relations Department of the city of Nuremberg, within the Brasov-Nuremberg partnership.

The source of inspiration for the 14 works of the series is a well-known song by David Lang, "Just (after Song of Songs)", each work using as a metaphor and having as title a verse of the song. The whole exhibition is thus a painted poem, in which the well-known dolls characters of Iulia Șchiopu float, suspended in a world of visual symbols related to the keywords of the Song of Songs and the whole pleiad of sensations, sounds, smells, touches. which the lyrics open to the imagination.

The artist's characters are accompanied by birds, butterflies, dragonflies, flowers and fruits, herbs, spices, integrated into imaginary landscapes, the fruit of both pictorial and literary fantasy. Iulia Șchiopu first "sees" stories, and then paints the characters that populate them. 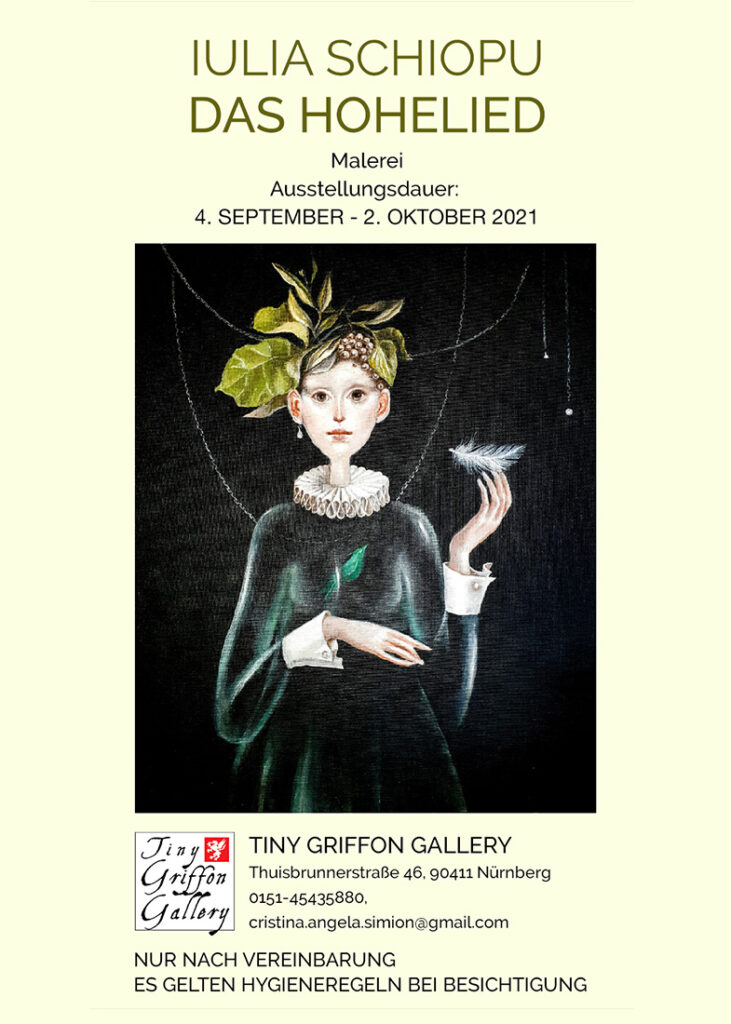 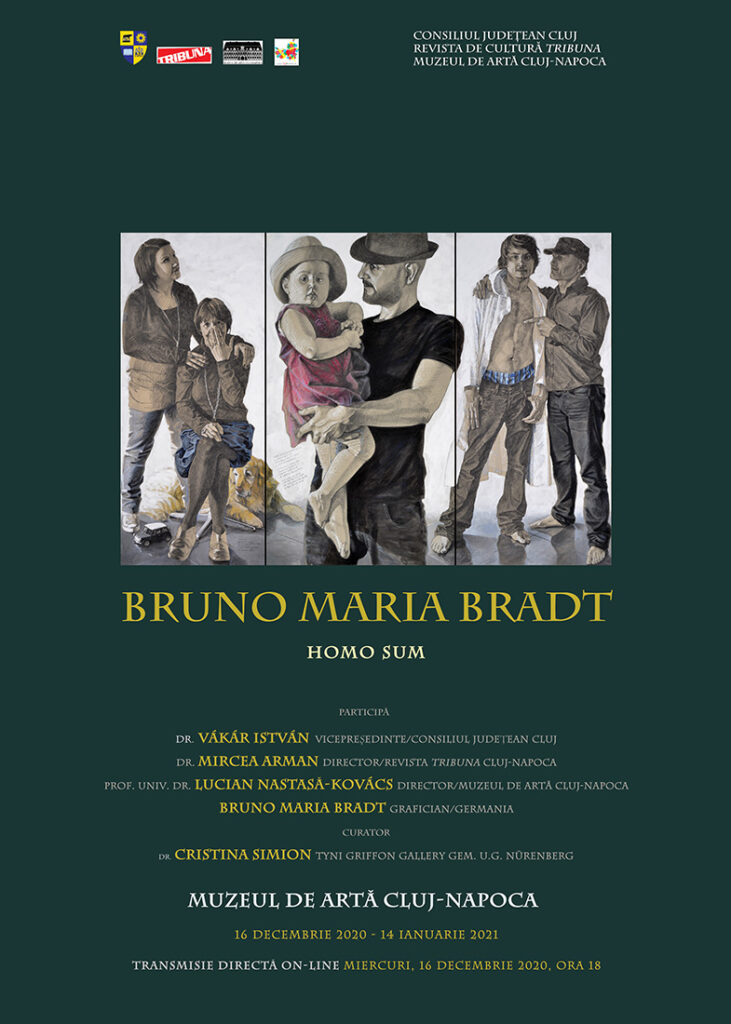 With numerous awards and recognitions in just the last years, Bradt reveals to viewers drawing as a shared language of expression, managing to convey nuanced emotions with apparent ease and - especially, as the artist likes to say, "stories". These are his stories, of his relatives, of the acquaintances who marked him at different moments, retrospectively recognized as defining, stories in which the alien-spectator feels inexplicably involved - because the epic thread is present even in portraits, but especially in the series dynamic, dedicated to a character or group of characters. This natural relationship between creator and consumer, although unfiltered, is not one of the primary emotions, but is characterized by a sensitivity perfectly assumed by the artist, which is revealed in all its imperfection, consciously anticipating the impact on the viewer.

„About the Moon” is the first solo show of beloved and popular artist Iulia Schiopu out of Romania, at the Tiny Griffon Gallery in Nuremberg, Germany. The show exhibits a series of poetic works dedicated to the month as a visual symbol of romantic escape and stories. Iulia Șchiopu's dolls "suffer" from fragility: although sometimes distant or even slightly frightening, they always have a delicacy that makes them attractive and mysterious at the same time. The series created by the artist for this exhibition has different sources of inspiration, but related to the rich symbolic load of the moon. The Earring-Moon, The Light-Moon, The Decoration-Moon, The Heart-Moon are interpretations of the central theme, to which the painter added some representative works for the melancholic imagery that has become part of Iulia Șchiopu's artistic identity. 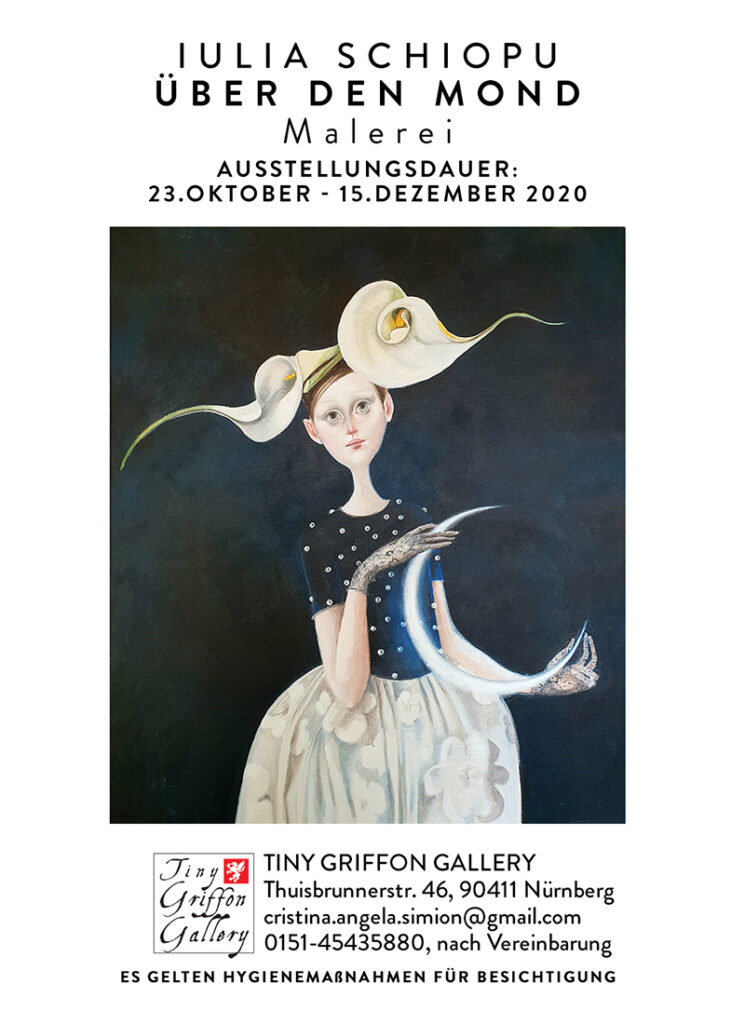 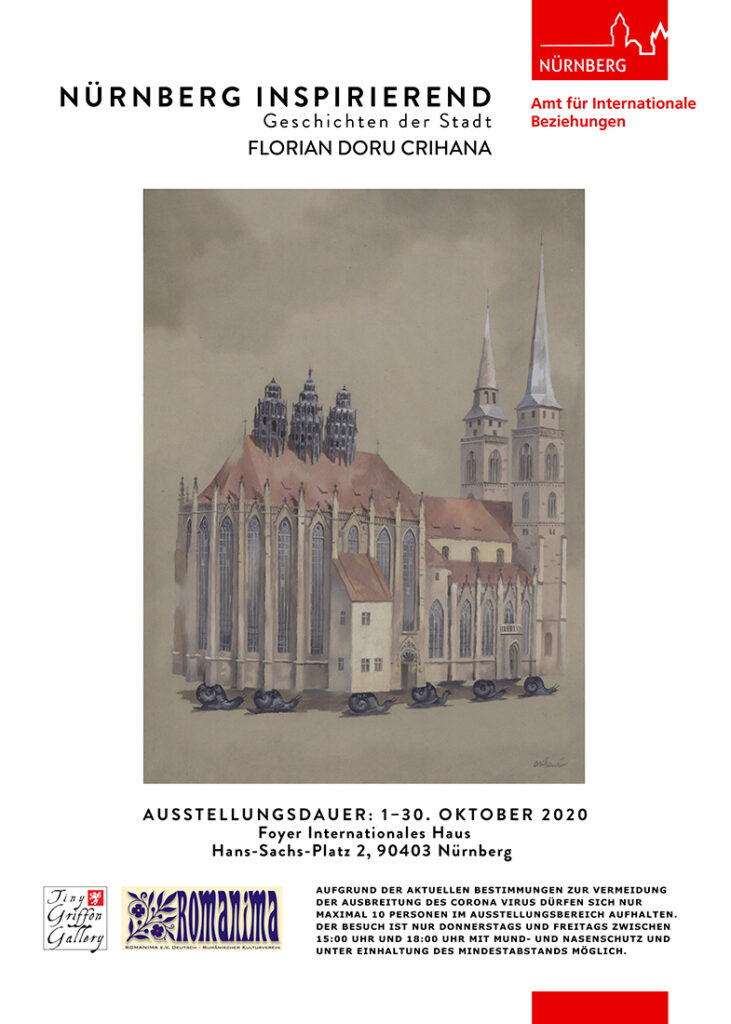 Nuremberg is the third German city whose chronicle is drawn by Crihana (after Berlin and Potsdam), as well as the last in which it was exhibited, in October 2020, at Heilig-Geist-Spital, in the first exhibition organized by Amt für Internationale Beziehungen der Stadt Nürnberg after the first wave of the pandemic, with impressive public success. Numerous visitors wrote in the book of honor that the exhibition helped them discover unknown aspects of the city's history, congratulating the artist on his choice of sources of inspiration. Each work was accompanied by documentary notes, for a complete understanding of the stories and symbols drawn.

The show comprises thirty works celebrating architecture, artists, astronomers, printers, engineers, inventions and inventors from Nuremberg, tributes to some of the city's most prominent figures, from Albrecht Dürer, Veit Stoss, Adam Kraft or Maria Sybilla Merian, to Konrad Georg Kuppler or Ulman Stromer, including legends and stories related to the main monuments and representative buildings, from the Burg to the Frauenkirche and the cathedrals of St. Sebaldus and St. Lorenz, to Weinstadel, Schönen Brunnen or Kettenbrücke.

Combining hyperrealism with trompe l'oeil, Lassel admits to being influenced by "Baroque illusionism" and his world-famous masters such as Bramante, Mantegna, Luca Giordano, Tiepolo, equally by modern Dali and Magritte, but managed to create a world and an atmosphere very different from theirs, unique in message and composition. His works are, each and every one, the artist's answer to humanity's questions, combining personal stories (...) with a rich and complex symbolism, which has its roots even earlier, in the riddles so loved by the Renaissance. 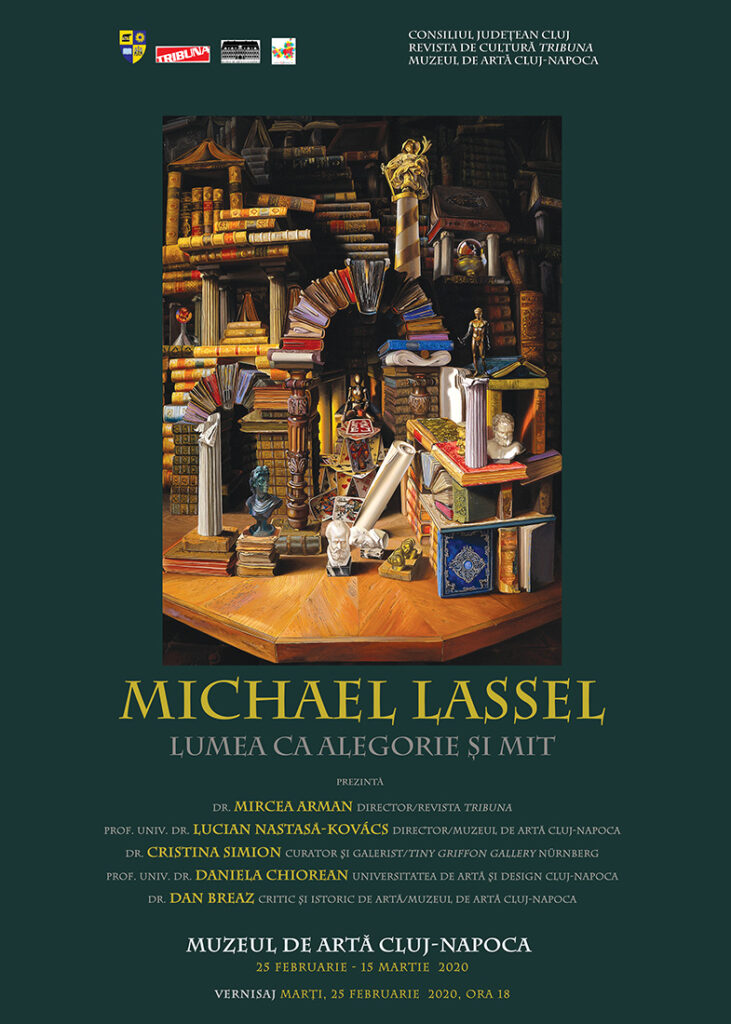 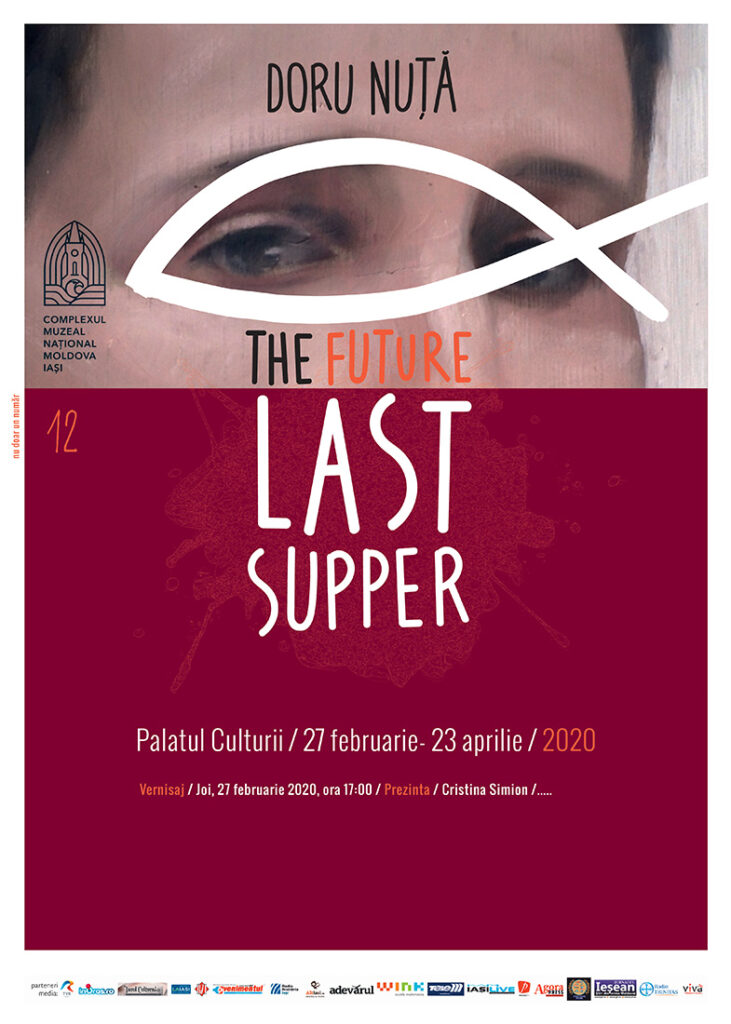 More actual than ever, the protestatary installation of the multidisciplinary artist DORU NUȚĂ, inaugurated at the end of February in the Art Museum in Iași, is the very metaphorical image of Europe under siege. This artistic project illustrates in an allegorical way the situation of the European Union, inviting the participating visitors to think and discuss possible solutions to the current social, economic and cultural challenges of the European space.

Designed to be presented in several European Union countries, THE FUTURE LAST SUPPER installation began its journey with an exhibition in the gallery of the Romanian Cultural Institute in Berlin, 2019.

The retrospective exhibition INTERMUNDI is a rigorous selection of the multidisciplinary artist Dumitru Şchiopu, bringing together works of painting, graphics and mixed media from different creative periods, but reunited under the sign of passion for abstract art and for the rigor of plastic construction.

A retrospective exhibition is always a challenge for artist and curator alike - because it transcends the usual role of the exhibition act, that of providing a platform for the ephemeral expression of a moment of the artist's creative life. INTERMUNDI covers not only several extremely different creative periods conceptually, technically and in content, but also to provoke a process complicated to define and self-define, to exclude collateral or insignificant choices and to concentrate on the main elements that mark a career artistic for over four decades. 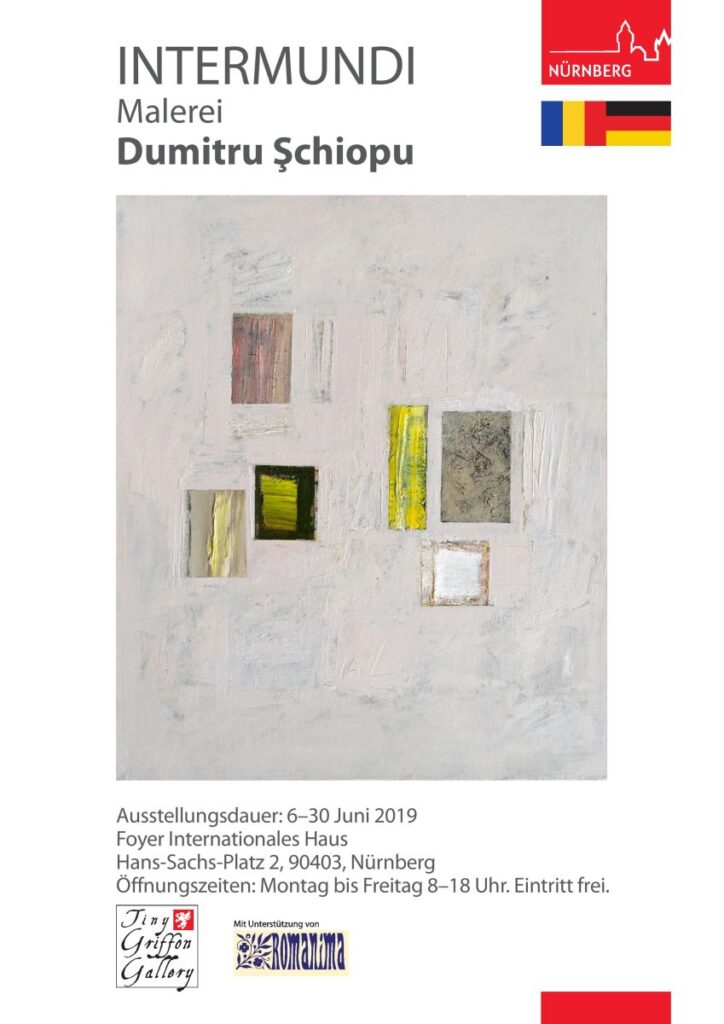 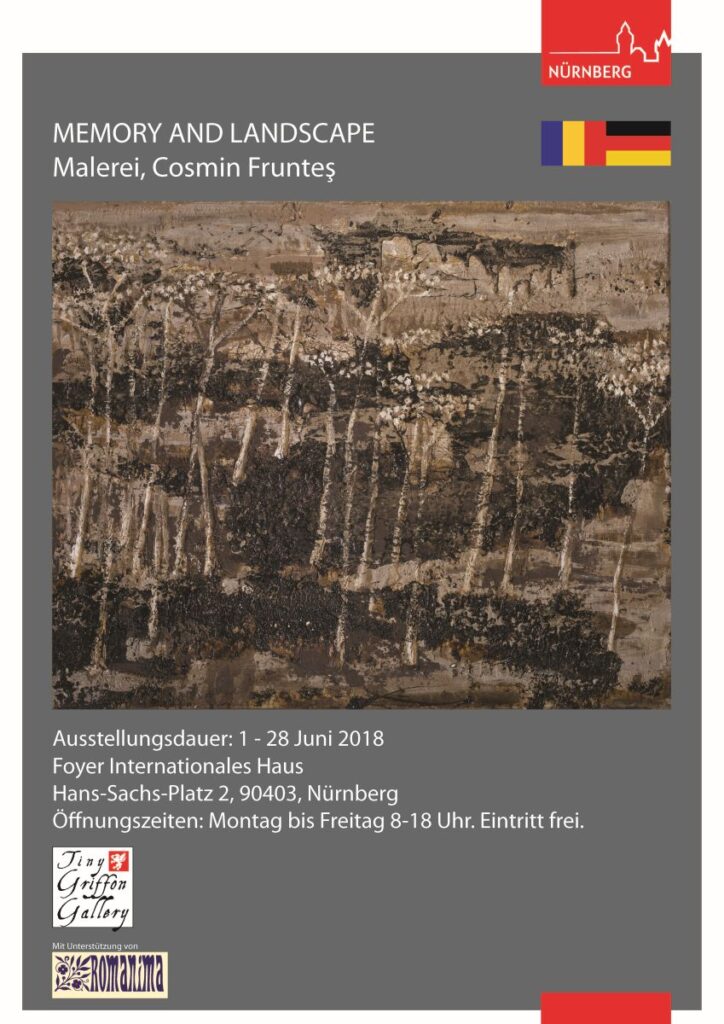 "Memory and Landscape" is a project of the Romanian artist Cosmin Fruntes, who has a rich record of solo and group shows (especially with the art group NOIMA), domestic and international, present by a few years in exhibitions and selections European Union (Vienna, Budapest, Karlsruhe, etc.). The “MEMORY AND LANDSCAPE” project has been displayed both in the space of the Multicultural Center of Transylvania Univeristy Brasov, Romania, and in the one of Internationales Haus, supported by the International Relations Bureau of the city Nuremberg, Germany. The concept of the exhibition is related to the artist's experiences in relation to nature. In landscapes painted on different media (canvas, cardboard, wood), always including materials from the field - accompanied by a personal story, Cosmin Fruntes succeeds, in fact, pictorial evocations of fragile, memorable moments.

October 2021: Silviu Preda, THE AUTOPSY OF AN EPHEMERAL SOCIETY,

Europe Gallery Brasov (co-curator, in the frame of the Biennale)

October 2021: RESTITUTIO 111, multiples by Jacques Herold in bibliphile editions, Public Library of Brasov County (in the frame of the Biennale)

October 2021: Tori Wranes, TRACK OF HORNS (videoinstalltion), Galeria 9 Brasov (in the frame of the Biennale)

February 2019: Anca Jung, THE OTHERS. A LOVE STORY, painting, graphics. Exhibition and concert in the Tiny Griffon Gallery Nuremberg

Exhibition and concert in the art gallery of the Consulate General of Romania in Munich and Florian Doru Crihana, EYES WIDE OPEN: EUROPEAN CITIES, Paintings. Exhibition in the gallery of the Europa House, Ljubljana, Slovenia.

May 2019: Stella Radu, GIVE YOUR BREATH TO THE DAY, paintings. Exhibition in the Tiny Griffon Gallery Nuremberg and Doru Nuta, THE (FUTURE) LAST SUPPER, installation - exhibition and concert in the art gallery of the Romanian Cultural Institute Berlin.

Exhibition and concert in Heilig-Geist-Spital Nürnberg, in cooperation with the Office for International Relations of the City of Nuremberg

with the Office for International Relations of the City of Nuremberg and the Cultural Advisory Board of immigrant Germans / Haus the home of Nuremberg.

May 2015 special retrospective show Michael Lassel, "Analogue Worlds" (painting), with the support of the Nuremberg Cultural Advisory Board of German immigrants and under the patronage of Ms. Dr. Julia Lehner, Culture Officer of the City of Nuremberg,

October 2014 solo exhibition Marcel Lupse "Duftgarten" (painting, mixed media), Nuremberg and "Memory of a City - Kronstadt, Romania" (special exhibition with reading and round table), under the patronage of the Office for International Relations, City of Nuremberg